Get to Know Angie

Status: Married with 2 kids and 1 cat. Work as a computer nurse for a home health agency.

Do you blog? No

5 little-known facts about you:
1. I had brain surgery when I was 20 where they removed a portion of the back part of my skull. They sealed it with pig hide and if you touch that area it’s soft. I’m also missing my first 2 vertebrae.
2. I’m a total motormouth in my car. In my head I’m Beyoncé. I’m a channel surfer too. I hate listening to things that I don’t like. Drives my husband INSANE.
3. I kissed a girl…. in a Taxi…. with my husband sitting right next to me.
4. I would be a photographer if I could make a living out of it. I currently take pictures just because I enjoy it.
5. I received a call from the sheriff’s office many years ago asking me if I knew anything about an egging that happened on the west side of town. I lied and told him that I didn’t.

Questions stolen from Twi-Between:
When/how did your Twilight obsession begin? I was wandering around Barnes and Noble looking for a new book and saw this huge set up with the books. I had seen the previews for the first movie so bought the book to read. It all kind of snowballed from there. I made my husband take me to the movie the next night. My heart clenches when Edward walks into the cafeteria every. single. time.

What is your favorite Twilight quote? “I can’t live in a world where you don’t exist, Bella” and “No measure of time with you will be enough, but lets start with forever.”

Who is your favorite non-holy Twinity (minor) character? Charlie

Which is your favorite Twilight movie? Twilight. It will always be Twilight.

What is your favorite song from any of the Twilight soundtracks? So many…. Eyes On Fire, Never Think, Flightless Bird, Turning Page, A Thousand Years

What is your favorite non-Twilight film of a Twilight star? Pitch Perfect

What is your favorite Twilight memory? My favorite memory is sitting in the theater during BD2 and being so outraged at the battle scene but then bawling my eyes out during the tribute. I think I experienced every emotion that night! Also, traveling across country to spend time with strangers only to meet THE best ladies who just get it.

New Questions:
Who is your favorite Twilight actor? Rob and oh yeah…. ROB

What has being a fan of Twilight opened up for you? It’s opened up me to YOU!! I have met SO many wonderful ladies! It was scary flying all the way across the country to meet up with strangers but it’s seriously one of the best decisions I have ever made! I would also have to say that it’s opened me up to the kinkier side of life. My daughter is totally a product of fanfiction. (kmah’s Note: I LOVE that you’re open for me, Ang! Bahahahahaha.)

What is your craziest fangirl moment? Haven’t been to any premieres but I did meet Stephenie Meyer!! Did that really happen?! (kmah’s Note: It did and we have the pics to prove it!!) And I will NEVER forget Erik Odom!!

Who is your favorite NON-Twilight vampire? Eric Northman. Especially when he’s nude.

Fanfiction Questions:
What are you reading right now? Real life has been kicking my ass so I have been re-reading Help Wanted. Love that one and there’s not too much angst!

I know it’s almost impossible, but ~ what are your top 5 favorite fics? I love too many! Some of the ones that I love are… Clipped Wings and Inked Armor, Secrets and Lies, Summer of Salt, Tropic of Virgo, Firefly in Summer. The list will just go on…

Who is your favorite incarnation of Edward (specifically, from which story)? Really love a cocky Edward like in the Naked Guy Upstairs or Scotch Gin and The New Girl. I like it when he knows exactly what he wants (Bella) and goes after it.

What are your fanfic hard limits? It’s really hard for me to read fics where Bella hooks up with anyone other than Edward. It’s okay if they eventually end up together but it’s just hard for me until they get to that point.

Who are your favorite authors? I can’t name them all!

Why do you read fanfiction? I stumbled on fanfic while reading the blog Twitarded. I read The Submissive…. and kept that shit to myself! I finally gave in and outed my new found addiction to a friend at work. I keep reading for the smut. I love a good love story and it’s even better with lots of good sex added in. Fuck that fade to black shit.

What other fandoms do you count yourself a member of? None. I religiously watch True Blood (even though the last several seasons have sucked) and Game of Thrones but do not participate in any group anything like I do with Twilight.

How Angie and I met: She was one of “the fic girls” that we met at the Forever in Forks fanfiction forum discussion meeting thing. She was also at the Forever party the next night and I fell in love with her even more then. I love every single thing that comes outta this girl’s mouth. 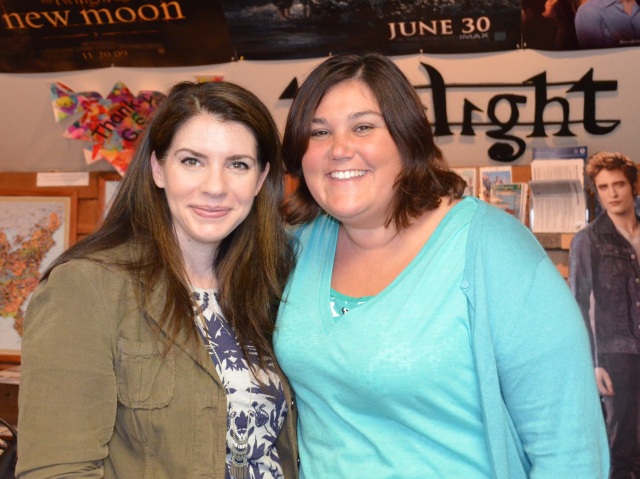 Alas, Angie and I have no pictures together ~ but here is one of her and Stephenie Meyer, taken hours before we met (with EdBoard photobombing)

1 Response to Get to Know Angie