I have always been drawn to things of an unusual psychological nature. When I was in my early years of high school, my best friend and I liked to find books dealing with characters with “problems”. I remember reading several books; one about a little boy who was abused and played with poop, another about a young preteen girl addicted to cocaine, another about a 16 year old girl who suffered from anorexia and tried to commit suicide. I was always fascinated by these stories. I even wanted to eventually study abnormal psychology when I finally made it to university.

There was one book in particular that made a huge impression. My best friend read it first and then told me I should because it was bound to be something I’d like. It was called Nobody Nowhere. (Perhaps you’ve heard of it. 🙂 )

Of all the books I had read dealing with people with problems, disturbed people, people on the fringes of society, etc., I had never really identified with any of them. Just been morbidly curious, I suppose.

Then I read this one and all of sudden, I had this inkling of recognition. My life was nothing like the person in the book (an autobiography) but certain things she described sounded intimately familiar. I remember one part in particular, when she describes being able to see air particles. I was struck with the thought, doesn’t everyone see air? I asked my friend. She did that scoffing thing that people seem to do when they aren’t sure whether or not you’re trying to be funny or if you really mean what you’re saying. It turned out, no, people can’t see air.  Dummy.

There were other things that I understood from personal experience too. (I’m going to have to get my hands on a copy of the book and read it again.) I felt that it was a ridiculous idea, but I wondered if I was autistic too or if I had been as a child and grew out of it. (I knew absolutely nothing about autism at that time. I don’t think anyone really did.) I wasn’t like the author. I was verbal. I performed in school. I communicated well enough. I behaved… mostly. So how could I have been autistic?

I even wrote my friend a note in the middle of class asking her if she ever thought she might be autistic too. Again, she laughed at me and said no. I let it go, but kept the idea in the back of my head.

Years later, I was in college, taking a Special Needs class for my Early Childhood Education diploma and my group was assigned our study project on PDD-NOS, then considered a subset diagnosis of autism. (I can’t remember now if I personally chose it or it if it was assigned randomly. Probably the former.) Again, I didn’t think I had that but I felt a familiarity with the symptomology. I felt a kinship with these kids that have such a hard time being in a world that doesn’t accommodate their unique needs.

I thought maybe I’m just really understanding of children and the sensitivities that come along with not being able to communicate what bothers you in an adult way. I could totally get why a child might freak out if the lights were making a buzzing sound. Why moving from one activity to another might be extremely difficult. Why sudden loud noises might make someone cry. Why flapping their hands or repeating a phrase over and over might be comforting. Maybe I was just a compassionate educator. Or maybe it was because I understood exactly how that must feel because I’d felt it too.

When I was working at a preschool before I went to college, there was a little boy in my classroom who was probably autistic, although he was undiagnosed at the time so I can’t say for sure. He had a case worker that came in to observe him and the teachers and tailor an IPP for him. She came up to me after one interaction in particular and said that what I had done and the way I spoke to him were perfect and exactly what we should be doing. It was something like reinforcing some vocabulary or something like that. (He was almost 3 and non-verbal.)  I was surprised. I didn’t realize I had even done anything. She told me the way I was with him was probably instinctive and I was lucky that I didn’t need to be taught that. (His parents later pulled him out of the school after a falling out with the owner and other staff. I was so sad to see him go. I could see him learning and growing and being happy, but I guess no one else did. I always wonder what happened to him and hope he found a more supportive situation.)

Around the time I was in college, I met a woman who has a child who, again, is most likely on the spectrum somehow but doesn’t have formal diagnosis. She would tell me stories of the quirky things her kid did or of how difficult it could be at times to understand her child. Instead of sympathizing with her, I always felt for the kid instead. I could see where the behaviour was coming from or what it meant but I didn’t feel like it was my place to tell this woman how to relate to her child. Who was I to do that?

After all of these near-misses with getting to know what autism is, it never truly occurred to me that the real reason I recognized behaviours and felt that familiarity was because I too am autistic.

It was like a chimpanzee looking into a mirror and not realizing the reflection is himself. 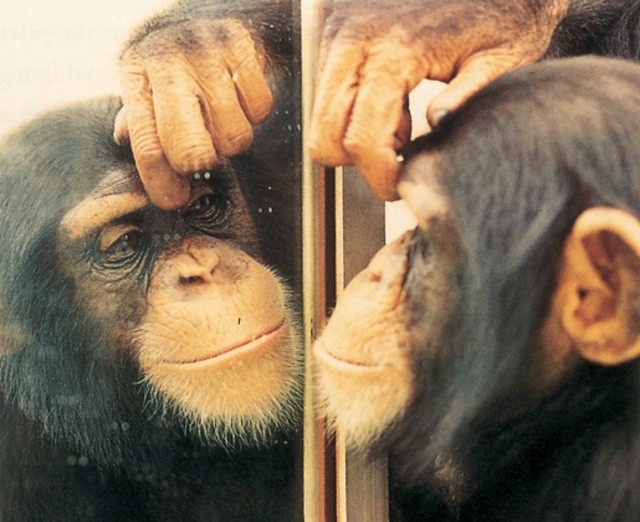 This entry was posted in personal and tagged autism. Bookmark the permalink.