Get to Know Tami

Here is the 6th instalment of my Twi-friends Q&A~

5 little-known facts about you:
1. I refuse to eat Wendy’s cheese burgers because square patties on a round bun is just wrong. (I did it once, only because the jalapeno baconater just looked too good and was screaming my name. I took the patty out and cut it into a circle)
2. I’ve had poetry published
3. Edward Scissor hands freaks me out and I refuse to watch it. But I love to fall asleep to horror movies- it’s soothing, lol.
4. Just the thought of putting syrup on eggs and bacon make me want to vomit. I am unable to watch someone eat it in real life
5. When I was 4 I could speak French and a little Italian. (my babysitter was taking French in school and used to talk to me in it and my great grandmother was Italian)

Questions stolen from Twi-Between:
When/how did your Twilight obsession begin? After watching almost every movie in the video store I finally gave in and watched the vampire movie with sparkly vamps (which I consider not real vampires, lol) I also wanted to know why girls waited in line at midnight to see a movie about fake vampires. I was hooked then started reading the books.

What is your favorite Twilight quote? “Well then I hope you enjoy disappointment.”

Which is your favorite Twilight movie? Twilight

What is your favorite song from any of the Twilight soundtracks?
Twilight: Eyes on Fire and Never think
New Moon: Possibility
Eclipse: Chop and Change and Rolling in on a Burning Tire
BD1: I Didn’t Mean it
BD2: The Antidote
Favorite soundtrack: Eclipse which is funny cuz I hated that movie)

What is your favorite non-Twilight film of a Twilight star? Thirteen

What is your favorite Twilight memory? Going to Forks for the first time and meeting Wonder Twin in person.

New Questions:
Who is your favorite Twilight actor? Jackson and Rob

What has being a fan of Twilight opened up for you? I fell back in love with reading after reading the books. I found fanfic which started me writing more. Also because of fanfic I met my Wonder Twin (best take away) and some really amazing people. Also finding new music, which I love. By writing my fanfic, it’s given me the confidence to publish my book.

What is your craziest fangirl moment? Meeting Jackson at a 100 Monkeys Concert on my fake 1st bday and him telling me my fake bday idea was awesome. On the outside, I was cool as a cucumber. On the inside freaking the fuck out. I may or may not have done a lil fan girl dance, once outside far away from others. (kmah’s Note: I really wanna see what that looks like!)

Who is your favorite NON-Twilight vampire? Damon Salvatore and Lost Boys is in my top fav movie picks.

Fanfiction Questions:
What are you reading right now? Too many to count

I know it’s almost impossible, but ~ what are your top 5 favorite fics?
1. The Harder they Fall (first fanfic and I fell in heart with it.)
2. Bitemarks & Bloodstains (first and favorite Jasper/Bella)
3. Firefly in the Summer
4. The Long Way Home (balled my fucking eyes out)
5. The Other Way

Who is your favorite incarnation of Edward (specifically, from which story)? I honestly don’t know. If it’s well written, any kind.

What are your fanfic hard limits? If it’s a good story, I will read anything. A shit plotline and terrible writing but you kinda have to read a little bit first.

What is your biggest ficpeeve? Shit moving at lightning speed. I prefer a little real-life aspects. I also hate whinny characters. I also hate when they drag shot along. Please get to the goddam point.

Why do you read fanfiction? An escape from real life. Helps ease my anxiety on a bad day and for the love of an amazing story, especially stories that make you feel.

What other fandoms do you count yourself a member of? I read a lot of TVD fics. I actually started reading fanfic because of Mortal Instruments but I haven’t found any real good ones for that. I also preread and read some Kingdom of Hearts fics

How Tami and I met: When we were in Forks this past September, Forever in Forks hosted a fanfiction forum thing and Tami was one of “the fic girls” we ended up discussing our mutual obsession with for several hours. (My apology to everyone else who was there and couldn’t get a word in.) What can we say? Mutual love really bonds people together. We hung out a bit more over the weekend (but not enough) and have made plans to do it all again next year. 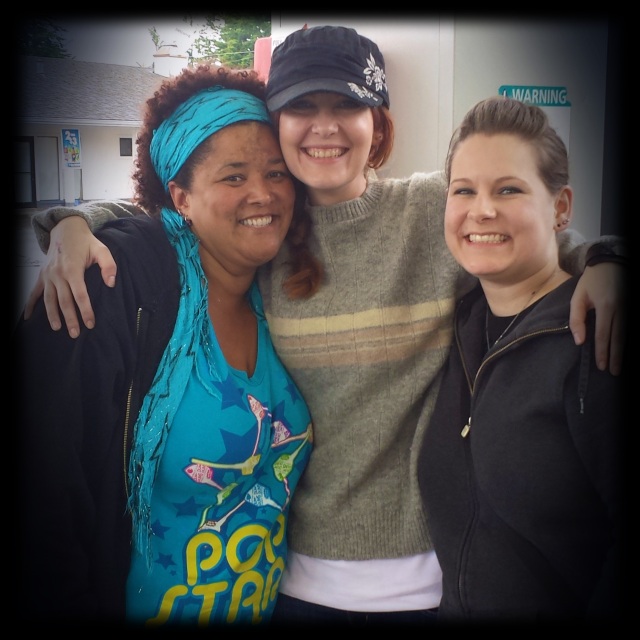 Brina, Tami and I spontaneously meeting at a gas station on our way out of Forks

1 Response to Get to Know Tami