If you’ve read my blog or know anything about me, you’ll already know that January 1st doesn’t mean that much to me. Today is actually a much more important day in our family – that is, my husband and me and his side of the family. (If you know nothing about me yet,  you should be told Hubby is Chinese.) There are a lot of traditions around Chinese New Year that we observe. I’m not going to list them now – you can Google it 😉 – because that’s not really the point of this post.

Apart from the customs involved with CNY, I use this point to take stock of how the new year has been sitting with me so far. CNY usually falls at the end of January or early February (it changes every year). I said in the last post that I was going to break my non-resolution-making habit by making a list of goals to tackle in 2017. Now, almost a month in, I’m checking in with myself and seeing what is working and what can be dropped. I’ve also been thinking of the other things I wanted to add to my list.

My one big goal for the year is to lose weight. My friend is getting married in September and I’m in the bridal party. I loathe the way I look right now and want to feel better about getting fancy. I want my face to have an actual shape instead of looking like a lumpy potato and I’d like to not feel like the Stay Puft Marshmallow Man in a dress. Ideally, 30-40 pounds is what I’d like to lose but I’d be happy enough with at least 20.

So far… I have done absolutely nothing towards this goal. In fact, quite the opposite. But~ I just recently saw this video and realized something.

Some background first: Back in 2010, after we came back from Japan the first time, I ended up gaining a bunch of weight over several months. By the time I was a few months in to my new job as a teacher in a preschool toddler classroom, I was at my highest weight ever. The following September, I started back at college and over those 2 years, dropped back down about 25 pounds without working out or drastically changing my diet. And then, I graduated and have slowly climbed back up pretty close to where I was again.

While I watched that video, something clicked. What is the difference between my lifestyle when I’m losing vs. gaining weight? It’s not diet or exercise. Well, maybe a little but the biggest change is my sleep schedule. True that I kept some crazy hours when I was in college BUT I was awake during the daytime for the most part. I woke up in the mornings and went to class. Therefore, I also ate meals at more “normal” hours too. I had a rhythm. This, I believe, is the key to everything. (Not just the weight.)

I had thought that I’d lose a little bit of weight when I started working again but that hasn’t been the case yet. I’ve been at my job for 6 months with very little fluctuation in numbers. I think the problem is that, because I’m only part time, my sleep schedule is just as insane as it ever was, if not more so.

According to what is said in the video (I highly recommend you watch it, and then check out all the cool sciencey videos they have on the VSauce channel. Very dorky-cool and entertaining.), when you don’t sleep regular hours during the night, you mess up pretty much every system in your body. Which is exactly what I’ve done. I have no circadian rhythm at all. My hormones are a mess. This is why I gained weight and have fertility issues. I’m not so in denial that I don’t think my shittastic diet doesn’t play a huge part too, but the fact that I dropped so much weight before by seemingly doing nothing makes me think I can do it again.

Of course, I’m not an idiot. I’m not going to do nothing other than sleep and think that’s enough, but to be honest with myself, I know I’m probably not going to make any drastic changes to my diet and start working out much until probably at least May. (Hence, 20 pound goal rather than 40.) Really, I don’t want to. Not yet. I don’t want to be fat, but I don’t want to work out or stop eating crap more.

So that means, from now until May-ish, my new goal is to sleep better. I made a vague plan. I’m not going to say I will be asleep by 11 every night right away. I’m going to start with 2am and work down by and hour in 2 week increments. And the same with waking up. Be up by 2pm, etc. This may sound to some as a ridiculously low step to make, but I am rarely asleep before 4am, some days not going to be at all until midmorning the next day. And on my days off, I am hardly ever out of bed before 4pm, sometimes not waking until it’s completely dark out. Aside from the flipped day/night thing, I also have no consistency when it comes to how long I sleep. It’s anywhere from 2 hours to 20. Really, I can’t even fathom any other kinds of healthy changes while I feel so out of control on this front. (It’s actually been a ginormous problem I’ve been downplaying to other people and to myself for quite a long time and it’s to the point where it’s dangerous right now. I may come back to this topic later on, but I don’t feel like it right now and this is not the post to do it in.)

A second part to this weight loss plan to go along with sleeping better is drinking more water. I figure while I work on one, that’s an easy thing to slip in that should be beneficial too. I don’t think I need to tout the advantages of water to you…  As it is now, I barely drink any. I drink tea almost exclusively. Like the working up to the ideal sleep schedule, I plan to work up to the recommended 8 glasses a day thing. Gonna start out with just one.

My next most important goal I made for myself this year was to read more. That idea came entirely from a graphic someone posted on Facebook that I took interest in. 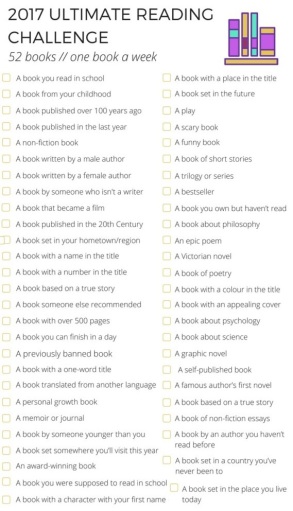 I like challenges but 52 books in one year seemed to daunting to me because I had thought I only read just one last year. Turns out, if you count audio books – which I do – there was at least 5, but that’s still barely any. I admire people who read voraciously and have always wanted to be more of a reader. Instead of just wanting to improve, why not just do it? So I told myself I’d do half that many. I’d read 26 books this year. I started right away. And I also opened up a Goodreads account to track my progress and keep everything organized. They have their own book reading challenge thing where you can enter how many books you want to read in the year and they keep tabs on it for you. Again, I second-guessed my ability to stick with it, so I went with 12 instead of 26. One book a month. I was going to only count books I read, like, with my eyes, but after talking to a friend, she convinced me that, yes, audio books do count. Scientifically, yeah, it might be better for you to use your eyes to absorb the written word. It does more for your brain, but listening to stories activates some other parts too. Anyway, it doesn’t matter. I’m counting them. So now although my Goodreads challenge says 12, I’m going back to 26. And guess what? It’s only January 29th, and I’m already done 4. The 5th and 6th will probably be done by Monday. I’m a teeny bit impressed with myself on that front.

The other goals I had listed in the last post were more of what I consider ‘mental health’ goals. And I am not in a spot right now where I even want to think about doing things that promote the betterment of my mental health. I’m putting that shit on hold for a bit. Logically, I know I need to do something to dig myself out of the pit I’m burying myself in pretty soon but I’m not ready yet. I’m just gonna sit in my pit by myself for a little bit longer. Again, might come back to this topic later on. Not today.

That’s my other goal then ~ come back to the health stuff. Lay it all out for the world to see, should they accidentally stumble across it. LOL. Even though very few people will ever read anything I even post on here, blogging keeps me honest. Someone could see it. It has the potential to be public. And there is something about pouring your heart out, being completely open, not hiding your darkness from other people… It’s kind of cathartic. I feel like it has a healing aspect to it. So I will share my thoughts on where I am in my head and how I’m dealing with it and what I’m going to do going forward later on. For now, we’ll call it ‘Goals Part 3: Working Title’. 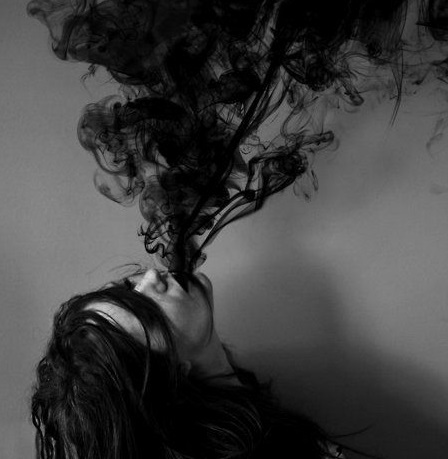 P.S. I was all obsessed with Bullet Journals for about a week. I still think they are cool but I’m kind of over it already. I tried it for a few days and it turns out not to be a style of journaling that works for me at this point in my journey. You can find alllll kinds of shit online about it if you’re curious – but it’s basically a daily tracker of whatever you want to track. I currently don’t feel the need to track things daily. I am going to keep a few of the pages, like the movies watched list, and just go back to my usual/sporadic dumping entries. And I prefer blogging for now.

This entry was posted in personal and tagged journal, resolutions. Bookmark the permalink.

1 Response to A Month In…