I briefly contributed to a blog network with editorial articles mostly about Twilight fan fiction and a few about Weezer. I worked really hard on them and am somewhat proud of the results so I decided to post them personally as well too. This is one of those articles.

I remember sitting in my tenth grade math class with my friend Taryn belting out the words to the recently released song “Say It Ain’t So” (and now you know how old I am). I ultimately failed that class and had to make it up in summer school…  but I can’t blame that on my favourite band of all time, Weezer.  Right from the beginning of their rise to fame, I was there, listening to, FEELING their music. Weezer may not be “deep” or “profound” but they are catchy, singable, and fun, and they occasionally have that one lyric that reaches into my heart and reflects what I’m all about. It was instant connection. I can’t really explain why, but I don’t really try. And I don’t have to. I just love Weezer.

I can’t remember where or when, but front man Rivers Cuomo has been cited saying that there are two kinds of Weezer fans – the older ones who were fans in the beginning and go to shows only wanting to hear the classics like “Buddy Holly”, “My Name Is Jonas”, or “El Scorcho” and the newer fans who only know the recent stuff like “Memories”, “I Want You To”, or going REALLY far back, “Beverly Hills”. Maybe Rivers in unaware fans like me exist. I was there in the beginning and I am still here, loving each new thing they drop and eagerly anticipating new releases.

At the beginning of January, Weezer posted on both their Twitter and Facebook that they would be doing a free show in Mississauga for the Microsoft Store’s grand opening at Square One Shopping Centre.  The actual store opening celebration stuff was going to be at Square One but the Weezer show was scheduled to be at the Powerade Centre… IN MY CITY. 10 minutes from my house. And free? Yeah… I decided as soon as I heard that, I was going to do whatever it took to be there.

The deal was, in order to get these tickets, you had to line up at the mall on Friday night at 10pm and stay there overnight until the store opening at 11am Saturday.  The first 2500 people inside the store would receive 2 tickets to the show, but only the people who had stayed overnight could get Meet N’ Greet wristbands.  So, there I was at 9pm ready for the Microsoft employees to give us instructions where we should start lining up. After about 15 minutes of chaos, they decided we should line up outside the mall doors until 10. I would like to point out it was around -35 degrees C (-31 F). I wasn’t really prepared for that. But the line up to line up was only going to be around half an hour. I could totally do that for Weezer. Hubby was nice enough to offer to stay until I got settled in the actual line for the night. After that, I was going to be alone. While we were standing there, shivering our asses off, excitement was high among the fans gathered. I noticed how young the majority of the other people there were. The people right in front of me looked at least to be in their 20’s so I started up conversation with them and they turned out to be pretty cool. They promised they would let me up with them if they got there before I did. Yay. Making friends already.

my new friends showing off our cool new t-shirts

The doors finally opened and, bless them, the Microsoft employees had everything organized and under control. We were ushered in an orderly manner inside the nice warm mall and set up in a 3-tiered snaking line against one wall. Event employees came out and wristbanded the first 200 of us with orange bands that we were to trade in in the morning at the store for our official Meet N’ Greet wristbands as well as sandwiches and chips from Panera. At that point, it was just a matter of staving off the boredom and I was home free. I was pretty much on my own until about 6am. Thank goodness for charging stations! 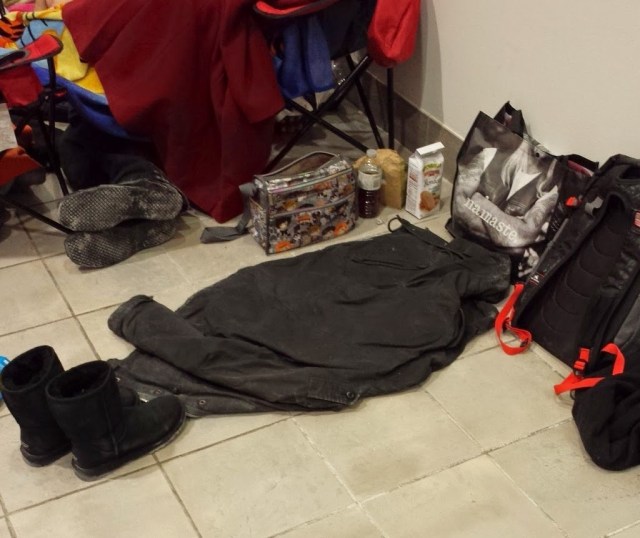 my little “camping” spot for the night in the mall

Throughout the night, the Microsoft Store let us know through their Twitter and Facebook event page, as well as in person through their event employees, that they would be giving away a lot of great prizes in the morning as we waited in line for the grand opening. To be entered to win, all we had to do was tweet them and use their hashtag for their new Ontario store. (This marked their seventh store in all of Canada.) They would be giving away things like X-Boxes, Surface tablets, and other cool Microsoft technology but they also had a guitar signed by the members of Weezer that they were giving away. Needless to say, I started tweeting my ass off. Just a few to start with but as soon as everyone was awake and starting to line up outside the store location, I was all over it. 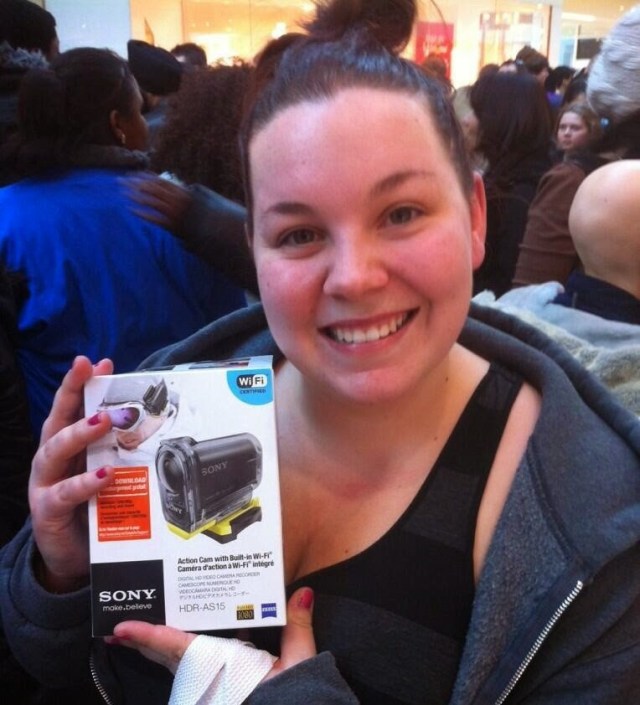 my line buddy won a camera

When the guitar was given away, I was only a little bit disappointed to see it go to one of the guys who was ahead of me in line, but I had talked to him a bit the night before and he seemed like a cool enough guy.They gave out two prizes at a time. Usually something okay and then something really great. (The first giveaway was a set of speakers or something, followed by the Xbox.) They also had big screen TVs set up throughout the line-up that would play a loop of some of the tweets they were receiving. It was actually pretty cool to see my name and words come up so often. 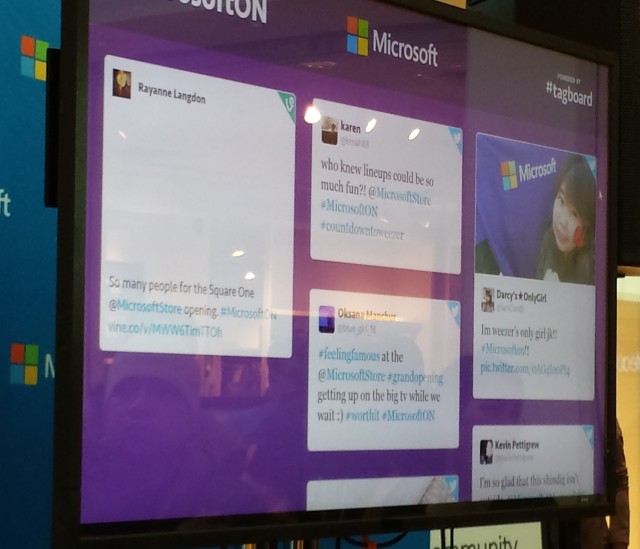 my tweets made the rotation shown on the screens 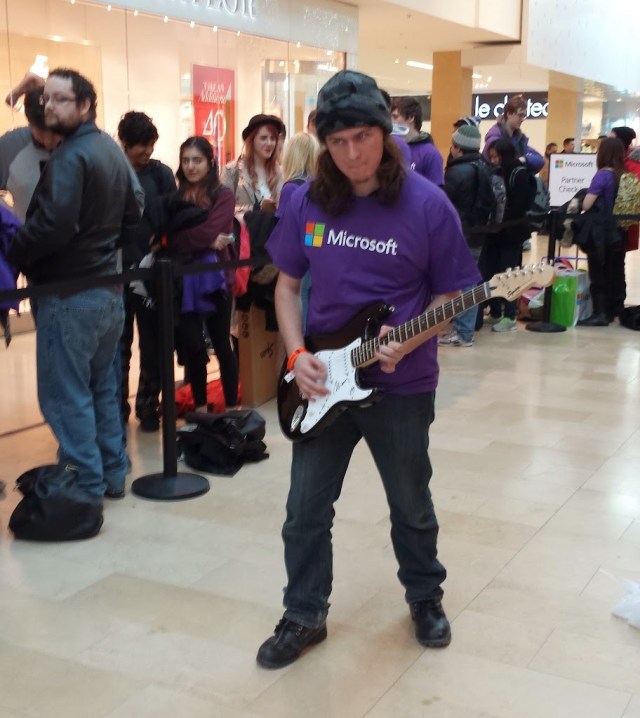 After all the store opening stuff was over, I made plans to meet up with my new buddies before the show the next day and then went home to sleep/recover.

This entry was posted in repost and tagged Weezer. Bookmark the permalink.