I briefly contributed to a blog network with editorial articles mostly about Twilight fan fiction and a few about Weezer. I worked really hard on them and am somewhat proud of the results so I decided to post them personally as well too. This is one of those articles.

We got to the arena around noon and met up with my linemates from the mall. In my experiences, lines are boring but when you have someone with a common interest to pass the time with, it’s really not so bad. Microsoft had set up the Jumbotron this time to scroll through our tweets and pictures. Again, pretty cool to see your name and stuff up there. 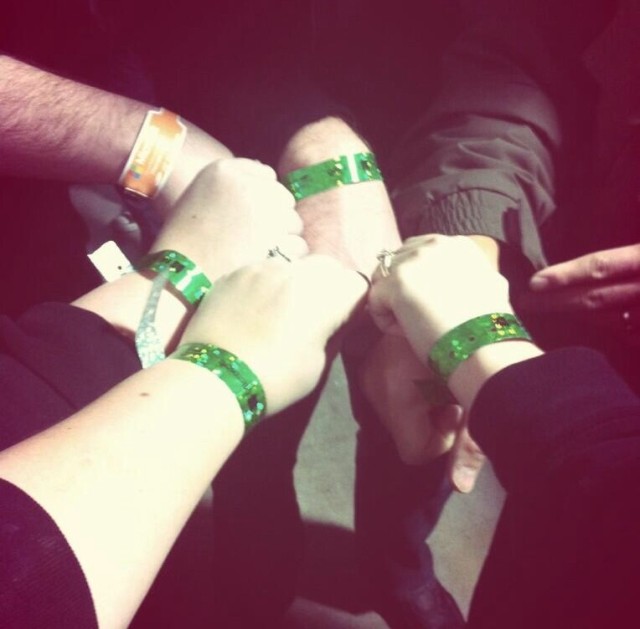 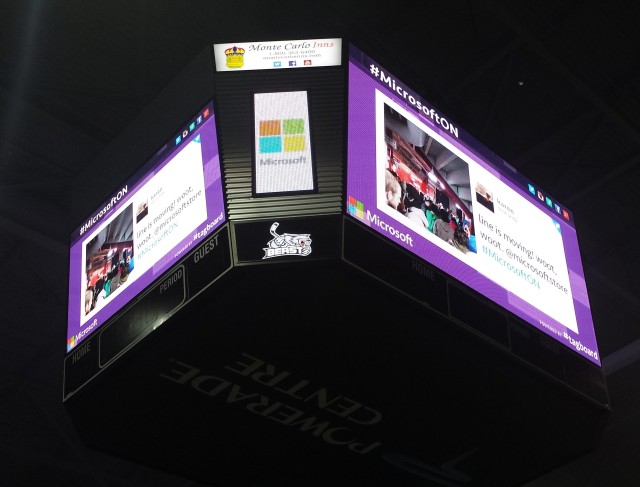 Before the show started, while I was getting some free burger sliders, I noticed ANOTHER signed guitar on a table covered with 102.1 The Edge (Toronto’s alternative radio station) poster surrounded by some guys who were receiving attention that minor celebrities might (obviously the radio personalities – IDK, I don’t listen to the radio really at all anymore, although this was the same station I listened to back in high school and where I first heard Weezer being played). A lot of people were looking at the guitar too. I went over and asked what the deal was. The radio guy told me they were giving it away to the person who proved on Twitter that they were the biggest Weezer fan. It may be clear at this point, I have never met anyone who is a big of a fan as I am.  GAME. ON.

He said they would be announcing it on Melani’s show the next day. I had roughly 24 hours to prove my love. I took it VERY seriously. I WANTED that guitar and since this was a chance to earn it rather than being based on luck, I was making damn sure it came home to live with me. I came up with what I thought were several very good reasons of why I am their #1 fan (LOL). At least, in Toronto. You can decide for yourself…

The boys eventually came on stage and played a great show, as usual. This was the 9th time I’ve seen them live. They are always good, but of course, energy levels vary. I wasn’t disappointed. And it was also really fun for me to hang out with my new buddies during the show, one of whom was seeing Weezer perform for the first time. 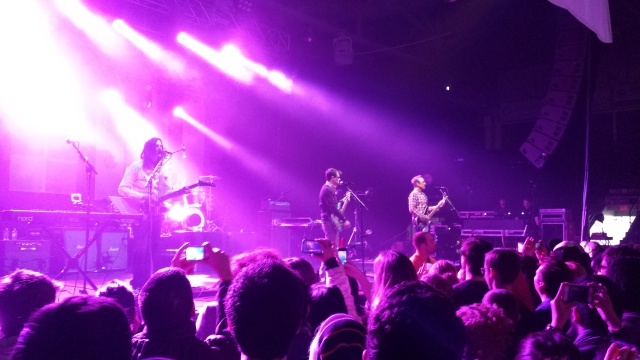 Since I am a shortie, I didn’t have the greatest view of the stage. Usually I could see EITHER Rivers (lead) or Scott (bass – always plays on the right hand side) or Brian (guitar and keyboard – always on the left), but not all at once. And I couldn’t see Pat (drums) at all. (Until he came out to sing Song 2 by Blur, which was the highlight for me.) We were not very close to the stage and off to the left a bit. I didn’t mind. It was more the atmosphere I was enjoying this time.

this was my view most of the time

Pat singing a cover of Blur’s Song 2 was awesome

Afterwards, we got to into yet another line to meet the band. We were told before that we would receive a pre-signed photo as well as have our photo professionally taken with the guys. Also, we weren’t allowed to bring anything to have signed. I had brought a photobook hubby and I made from the Weezer Cruise just in case, but true to their word, event staff pretty much did a pat down of everyone as they approached the area. I was hoping to get to the back of the line to maximize our time with the band (a little trick I’ve learned over time – you’re not as rushed when there is no one left waiting behind you) but we ended up around the middle.

The whole thing was extremely rushed. When it was our turn next, someone snipped off our wristbands and ushered us over to the band. I barely had time to say hi to them! And I didn’t want to take up the chances of the people I was with if they wanted to say anything. I did manage to tell them to have a good time on their upcoming second cruise, to which Brian asked if I was going and I said I couldn’t make it this time.

By the time I was walking away from the other side, the next group had already taken our place. We were given our signed photo and told the one that was just taken would be available on the Microsoft Store Facebook page later on.

At 1:45pm Monday afternoon, I was lying in my bed, listening to Melani’s radio show on my ipad. At that point, I was thinking ‘I had to have won, right?’ (I had creeped all the incoming tweets to The Edge and I had, by far, the most in number and the best reasons, IMHO.) but there was that lingering doubt that things like this don’t happen to me. I had never won anything before. I had mediocre luck at best when it comes to cool things like that happening. Nevertheless, Melani came back from a commercial break to announce the winner and I sat there rigid, awaiting the news. When she said my name, I FREAKED.

Now, I had liked to think that although I’m easily excitable around friends and never shut up and am a total goof, I can keep my cool in situations like this. I am not one of those screaming, crying, psychotic fangirls.  I can tell you… you THINK you will act a certain way until you get to that moment. My reaction totally caught me off guard.

I jumped up off the bed and screeched to hubby, who was downstairs, “BABY, I WON! I &*%$ING WON!” and started jumping around and laughing like a twelve-year-old idiot. I did my best to listen to Melani as she extoled my virtue as Weezer fan and also made poked fun at me for being crazy. I immediately jumped back on Twitter to thank her and freak out a little bit more.

After an email from her and then her assistant to verify my info and tell me where to pick up the guitar, I could finally relax. Nothing made me happier than having that guitar in my hands. I not only EARNED my prize, but I felt I had earned my stripes as a TRUE Weezer fan and a proper FANGIRL. 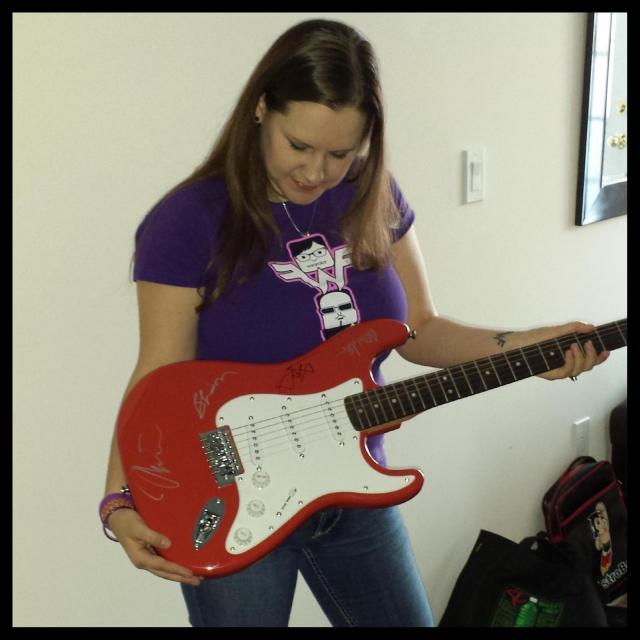 Interesting Sidenote:  Don’t ask why (or do, and I MAY tell you), but I ended up having a conversation on Twitter with a paparazzi guy from Toronto about three weeks or so later that lead to talking about Weezer. He had been at the show and had seen the guitar. As only these ‘types’ of people can do I suppose, he found out from The Edge guy that they had already decided AT the show to give the guitar to me. I had tweeted them while I was still in line at the Microsoft Store that I have a ‘flying W’ (Weezer’s logo) tattoo on my wrist when I was still trying to win the first guitar. The radio guy told the paparazzi guy that unless someone else came up with something better, “the tattoo girl is gonna get it”. The rest of my tweets were just icing on the cake, I guess.

If you missed it, check out PurpleBrina’s Music Monday this week. She let me take over and it’s ALLLLLL Weezer videos.

This entry was posted in repost and tagged Weezer. Bookmark the permalink.