I’m almost a month late for Thanksgiving but we’re in that time period between Canadian and American and since most of the people I talk to on a regular basis are Americans… I’ll just pretend this isn’t weird to be thinking about this now.

I was, as usual, reflecting on life and shit last night and was considering myself pretty lucky. I don’t have everything I’ve ever wanted but I have a lot of the things on that list. And I have everything I need. My life is roses.

I struggle with the thoughts in my mind frequently but I am aware those are just the products of a combination of illness and lifelong habits. It’s not just the big things I appreciate – house, husband, etc. – but it’s teeny little daily things. Out of the blue moments and glimpses. For an example, this. One morning, after a night of doing whatever it is that I do on my computer all night, I was having a cup of tea and looking out the kitchen window. It was raining and gloomy (my favourite weather) but it was bright and warm in my kitchen. I had a spark of recognition. 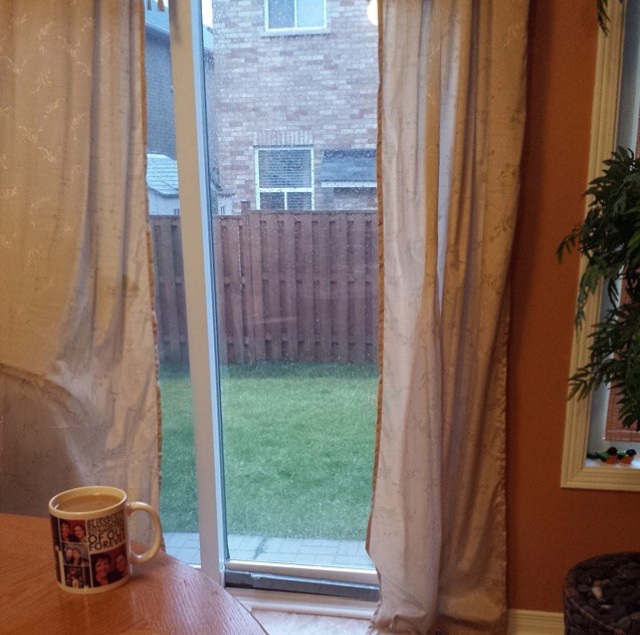 I am weirdly aware of physical space and that is the area where my imagination is strongest. When I’m reading, I don’t picture characters or anything like that like most people seem to. (There is no wishful star casting while I read.) But I automatically see the environment where the story takes place. Sometimes it’s a place from my past (an old house I lived in maybe) or sometimes it’s somewhere I’ve never been. I don’t see people’s faces but I do see how they move around. (I’ve spent some time thinking about this a lot before too. I guess it makes sense. It’s how I see the world. When I’m talking to people, I am often not looking at them but rather the space we are in. And I have this weird spatial memory too. I remember directions well not from rote but by feeling. I can go into a place I have been in once before, years and years ago, and instinctively remember it. Anyway~ way off topic…)

My point was…  In that moment, I saw in real life a version of an idealized fantasy place I had daydreamed about since I was a little girl. I must have seen something on TV or somewhere that had a particular gradient of colours and light in a kitchenscape with rain out the window. I wanted to go to that place. I wanted to sit at the table, sip something warm and comforting, and stare at/listen to the beautiful rain. I used to try to draw what my imagination saw but never could do it justice. Suddenly, as an adult, there I was, witnessing something tangible I had wanted for years. I was thrilled. I felt like the universe had said, ‘okay, this one is easy. you can have it.’ Of course, I’m sure this makes absolutely zero sense to anyone but myself.

The best part of all these small “dreams coming true” is that I am cognizant of it as they happen. THAT is what I am most thankful for – the ability to see what I have given to me and appreciate it. A lot of people are miserable because they can’t see the good in their life or stop and, essentially, smell the roses. Little gifts are given to us all the time. If you don’t realize that, you can’t receive them. We all want big things in life but it’s being thankful for the little things when they pop up that keep me going when the big picture is not so pretty.