Things I Bought for the Trip – Part 2

Since I did one last time, might as well do it this time too~

Hubby and I went pre-trip shopping yesterday. Not all the way downtown this time. Just out to Square One in Mississauga. It’s a trek enough in itself. Hubby has told me I am to point out in my blog how much of a sweetheart he is for going that far and in bad weather. It had just started snowing when we left the house and it was quite the dicey drive home, but we made it back in one piece. And although I only crossed 3(.5) things off my list, I’d call it fairly successful. 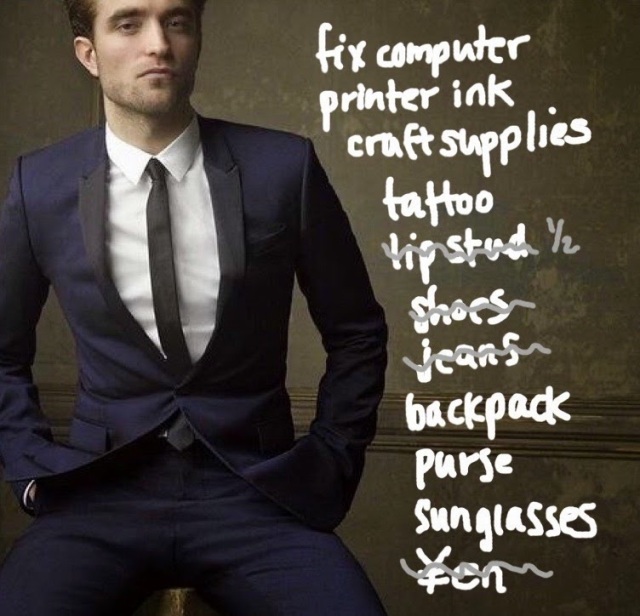 Whenever I make to-do lists, I like to make them pretty. Plain paper (or a black screen) is boring. And he sure is pretty!

The first three things on the list have nothing to do with Japan – just things I need. (My poor computer has been chronically ill for the last two/three years. The other night it finally breathed its last. Right in the middle of doing something, it just shut off and won’t turn back on again. At least it’s not in pain anymore and has hopefully moved on to a better place. It was my true and reliable friend for the last 7 years. Since I knew it was “any minute now” for so long, I regularly backed everything up on a hard drive but there are a few things still on there I want since the last save. Maybe some kind of computer necromancer wizard can bring it back from the dead just long enough to extract those things. AND my iTunes. *fingers crossed*) Since the weather was bad, we weren’t able to do the multi-stop trip originally planned.

The tattoo is still a maybe… Trying to convince hubby he should let me get it (ie. pay for it – it’s money I need, not permission) BEFORE we go to Japan. Although more tattoos for Japan might seem counterintuitive, I already have too many to be allowed anywhere near an onsen so what’s one more going to do? For those that don’t know, tattoos are still looked down upon in Japan, mostly because of the connotation of ties to the Yakuza. If you have any, you can’t partake in the wonders that are public bathhouses and/or hot springs. Boo.

Anyway~ I had a plan to get a very simple torii gate tattoo after returning home last time to signify that major item crossed off my bucket list. I just never got around to it. That’s kind of why I want to get it beforehand. I’ll get something else as a memento for this one… 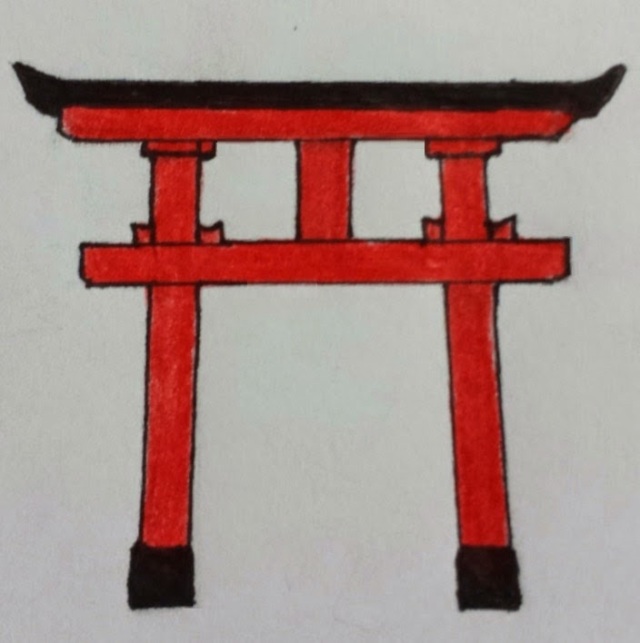 I am going to have to go back out again next week to try another mall for a new backpack and purse. There were hardly any backpacks and what I said last time about purses still holds true. I am too picky. I actually bought a new backpack right before going to Hong Kong, but Hubby is going to use that one. That thing and I did not get along well. I miss my old old one but the bottom is ready to fall out. 😦

Hubby suggested I just buy a purse when we get there. I could do that…

Sunglasses also aren’t a huge deal. I have a pair that do the job, but they are weird looking. I don’t even want a “real” pair. I saw some ones that I liked today but I don’t want to spend $100. I don’t even want to spend $20!  I just break them. That’s what happened to the ones I bought last time. And three subsequent pairs after that. (They made it through the trip to Japan just fine, but not so lucky when I started working in a preschool that fall.) Too bad. I liked those ones.

The pair I have now were $8 at a highway rest stop.

The successful highlight of the shopping were the shoes and two pairs of jeans.

Jeans were a must. I’ve gained weight since being inactive again and am down to one pair that I can wear comfortably right now. Not a big deal when I never leave the house and live in yoga pants or pjs all the time, but for out in public for 2 weeks straight, obviously need more than 1. I only planned on getting one more pair but the sales chick gave me a discount for the second pair. They didn’t have the right length so I’ll have to get them hemmed. Used to that. No big deal. 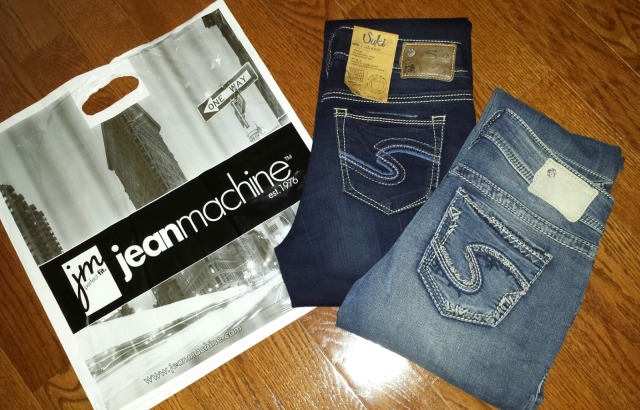 Shoes I was iffy on. I have a ton of Chucks that I love and a brand new pair of Sambas that I adore, but both are very hard/flat-soled and my feet die after about 3 hours. Last time, I had a huge issue with that. I had my (very first pair of) Chucks and a pair of running shoes. I think I mostly wore the running shoes and even then, by the end of each day, I was hobbling around and practically in tears. A few nights ended early because I just couldn’t take it anymore and most days, I woke up in the morning STILL in pain. Because of that WITH the running shoes, I know that pain will be inevitable no matter what my feet are in. I was okay with taking a pair of Chucks and the Addidas only this time, but I put it on my list just in case something came up. And something did!

Before the age of Converse in my life (starting with that first pair I bought for Japan in 2010), I wore Skechers running shoes almost exclusively. (Before that, high platform sneakers, which were awesone, BTW.) But tastes change. I went from superchunky looking, to (fake) althetic looking, down to very flat looking. NOW running shoes look weird to me. I had to wear a pair of my old Skechers this past September during my girls’ trip because my Chucks (the very same) were somewhat destroyed by water and sand when I was unexpectedly thwarted by the tide. I felt horribly self-conscious wearing them. I think it might be because the profile of the jeans I wear now are so drastically different. When I was wearing running shoes, I wore jeans with a flare that mostly covered them. Even with the bootcut pair I wore them with in September, they looked too chunky. I mostly wear straight or slim fit with the Converse now. This concerned me because how would I possibly find a running type shoe that would be okay with those jeans?

Well… I didn’t REALLY, but as we were on our way out of the mall, we walked past the Skechers store (I hadn’t even bothered with the sports stores like Athlete’s World or Foot Locker, etc.) and I decided to just see what they had. There was a slim-looking, all black pair that they had up front. No laces, just the slip on style. And they had a memory foam insole. Nice! I tried them on and they didn’t look that bad. And such a difference on my feet between them and the Sambas I had on. The only problem was that they had no real arch support and my foot was already rolling to the side.

Enter sales chick. She asked, I explained. Japan, 2 weeks, lots of walking, blah blah blah. So she showed me another pair, specifically made for walking (NOT running). They have an insole made of… yoga mat. Squishy. Shock absorbing. Odour resistant. Cool! Also slimmer than my clunky old ones and all black. (Like ninjas on my feet – you don’t even notice them…) AND the girl was cutie-tootie and started talking to me about Japan. Quite a long conversation about KitKats ensued. Lol. So…. I bought them. Obviously.  I’m hoping my feet will thank me and I will have some relief from the excruciating pain to the point that the awkwardness my brain may still register at athletic looking shoes with slim fitting jeans will be cancelled out.

Then there is the stud for my lip piercing… *sigh*  I currently have a ring in my lip. I want to change it out for a stud before we go. Just less for people to stare at since they already stare a lot. I have both a silver and a black one, but I was thinking I wanted a rhinestone one. Hot Topic had a nice one but it was 14g and I wasn’t sure if I could make that fit. I ended up buying a five pack from Claire’s even though I would never wear at least 2 of them and one was just a ball stud, identical to what I already have. It had 2 rhinestone ones I could use though. Turns out, as I noticed when I got home, not. The way they are packaged made it hard to see the actual shape. One of the rhinestone ones is heart-shaped. Ew, no. So only ONE useable stud for $18. Bad. I’m so returning them (if possible). I should have just waited. There is a kiosk in SQ1 that sells stuff for piercings individually. Should have gone there… 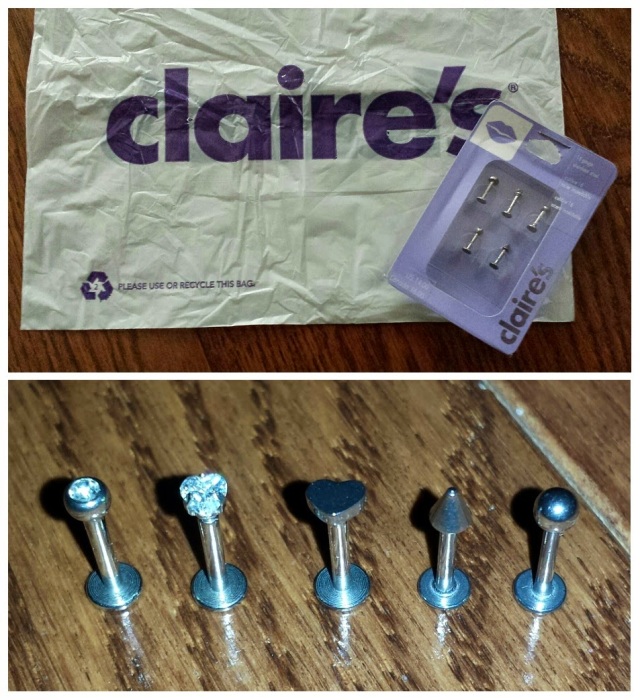 If I get the tattoo, though, I can get one there. Problem solved.

We also bought some yen (Japanese currency, for those living under a rock). Last time, the Canadian dollar was really strong. Almost on par with the American dollar. We paid approximately $1013 for 90,000 yen 5 years ago and we did it at one of those currency exchange places in the mall. We ran out while we were there and it’s true that a lot of places in Japan are cash only. We ended up getting another 60,000 on two separate occasions from ATMs while we were there, which is a huge hassle and also very confusing.

This time around, the CAD is pretty shitty. We stopped by an exchange place when we first got to the mall but Hubby did some math in his head which is beyond my understanding and said with the rate they offered and the fee, we would be out over $300. That’s no good. While I was slurping some udon in the food court, he called the bank that is located in the mall and the guy he spoke to said they had yen at the branch but that he couldn’t give him an exchange rate over the phone because it changed minute to minute. So after stopping by a few more stores first, we made our way over there and lined up to speak to a teller. After waiting 20 minutes or so (which made Hubby really antsy since he wanted to leave ASAP before the weather got even worse), the teller told us they don’t keep foreign currency in the branch but we could order it and it would take two business days to arrive. He was so pissed!

We left the mall with none, but there is a branch of my bank in the same plaza as the grocery store near our house that we had to stop at anyway, so we ordered some there. $2188.83 CAD for 200,000 JPY. It should be in tomorrow for him to go pick up.

So that is my very long detailing of what I bought or didn’t buy yesterday. I write these things for myself. If anyone besides me is reading this and actually got this far into the post…. why? Lol. But thanks for reading my useless rambling.

This entry was posted in japan and tagged currency exchange, shopping, trip to japan, what to buy. Bookmark the permalink.

2 Responses to Things I Bought for the Trip – Part 2