Team Edward or Team Jacob? Does It Really Matter? Yes!

Ah, the age old question. Who of us hasn’t been asked it a million times? And of course, you NEED to pick a team. No Twihard can be undeclared, even if you claim Switzerland.

Where do I stand? Obviously. I am 100% Team Edward. From the beginning. Never wavered.

For me, I’ve always loved both Jacob and Edward.

Jacob is cute, funny, sweet, and all “I’ll fight for you till your heart stops beating” (and what girl doesn’t want a guy to fight for her?!). But Edward… ah, Edward. Edward is perfection. And you can’t fight with an eclipse!

They both love Bella. They both want to protect her. They both feel that compelling need to be with her. …All very romantic. But Edward is the one who always puts Bella first and would do absolutely anything to make her happy. Even give her up. (And Jacob can be manipulative and immature.)

When the first three movies were all I had seen, I would simply say “Yup. Team Edward. Why be on the losing team?” No, it wasn’t that simple (or shallow) but I didn’t feel the need to explain.  Then I read Breaking Dawn and Jacob was no longer the loser (but not until book three). The triangle had become a square, as Taylor put it. Or a perfect circle, as Kristen said. Some of my favourite moments of New Moon and Eclipse are the heart wrenching ones where Jacob is trampled all over – not from a hurtful, condescending point of view but because of the depth of emotion and sweetness of it all. It hurt me but I loved it. How much pain can one guy endure?! I am so glad Stephenie Meyer gave him his happy ending. I love the way things turned out. So much so that I started dreaming up my own continuation of what would happen once Renesmee reached full maturity.

So, yeah, I’m Team Edward all the way but I adore Jacob.

On a side note~ I go to school with a bunch of youngin’s (18-20 year olds make up the majority of my program) so I get a firsthand account of things that interest them. Many of them like Twilight and the majority of those that do, claim Team Jacob. It seems as though the dividing line is with age. I have yet to come across a “TwiBetween” who is Team Jacob.  Hmmm…

It also makes me wonder, if Taylor Lautner didn’t portray Jacob, or if there were no movies at all, would the dividing lines still be the same? Are these girls really Team Jacob or are they really  just Team Taylor? (Oh, the things I have time to ponder…) 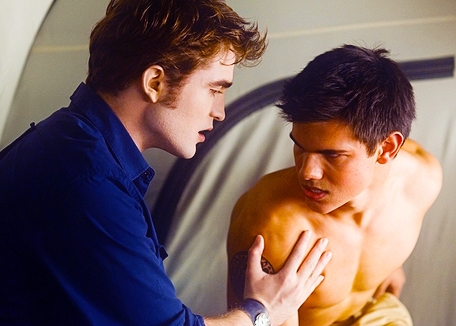 This entry was posted in twilight. Bookmark the permalink.