I grew up eating dehydrated instant ramen, which in my family we called it “Ichiban” although we didn’t eat the Sapporo Ichiban brand… just no name crap. But that’s how it was introduced to us by my cousins back in 1987 (who probably did eat the brand… or at least would have seen the commercial. Remember it?! SAPPORO SAPPORO SAPPORO ICHIBAN!! Haha.)

I didn’t even know that it was called ramen until I was in high school. Although, that’s probably a good thing ~ because my brain never properly linked that… stuff… to the ramen I heard about when I started getting interested in Japan. To me, dehydrated instant ramen is not ramen. And I can guarantee that anyone from Japan or anyone who has had REAL ramen would agree.

Anyway~ when Hubby and I were in Japan, we ate quite a bit of ramen. It was at the top of our list of things to do while we were there. (We still eat the crap stuff at home but are fully aware that it is not ramen.) When we got home, we were in withdrawal. After a few months, Hubby was desperate one day so he went online and searched for a ramen restaurant nearby. I had never seen any in my wanderings around downtown Toronto. I don’t think Toronto has much in the way of Japanese stuff in general. Lots of sushi restaurants but they are mainly owned by Korean or Chinese people. I’ve HEARD of an area that has some shops and a cultural centre of some sort, but I’ve never been able to find it!

I was skeptical that he would be able to find anything authentic. He came up with, I think, only 6 ramen restaurants in all of Toronto. He picked the one with the best reviews and the night we were downtown for Fan Expo, we decided to try it out. My expectations weren’t high but I was pleasantly satisfied with it. Not the best I had ever had but, as far from Japan as we are and with the unlikelihood that we will be returning any time in the near future, it’s still pretty good.

We liked it so much that we are going again tomorrow! I’m excited ~ I’m dying for some ramen. We went there in August.

So~ if you are in the Toronto area and have a craving for, or want to try out authentic Japanese ramen, go to KENZO RAMEN. It is located at 138 Dundas Street West in between Elizabeth Street and Bay Street. (It’s on the north side.) If you are taking the subway, get off either at Dundas or St. Patrick and walk the rest of the way.

checking out the menu 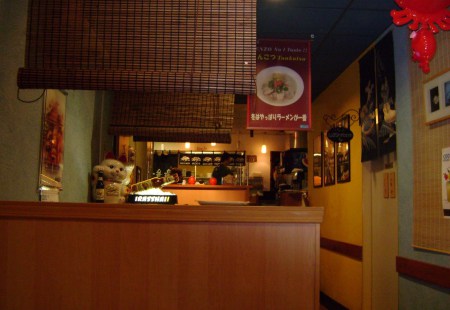 decor ~ They have booths (shown), tables to the right of this, and a counter at the back of the restaurant. My back was to the front as I took this.

I ordered tea but was disappointed that I got a bag in a cup of hot water.

I ordered shoyu and Hubby ordered chashumen ~ but when it came, we switched.

So good that we had every last drop (almost… the meat in the shoyu was a little fatty). 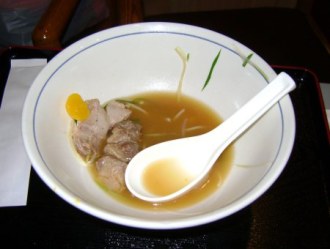 This entry was posted in japan and tagged ramen, Toronto. Bookmark the permalink.