I was sooooo excited ~ I could barely sleep. That was probably a good thing because our flight was supposed to be about 13 hours (ugh~). We made sure to wear comfy clothes and pack a lot of snacks and various forms of digital entertainment. (My husband had his PSP, I had his old Nintendo DS and the laptop and we both brought our iPods ~ mine topped up with J-pop of course!) We even packed a nice soft blanket in my backpack to keep up cozy on the trip. One thing I did forget in my excitement however was my pillow (I bring it everywhere with me!) ~ I had it ready to go… Brought everything downstairs to the front door, but on the way out to the taxi, I must have had my hands full and it ended up staying on the couch. I noticed about 5 minutes after we left the house but I wasn’t going back for it at that point. (I kind of wish I had ~ I ended up using both of the teeny pillows they provide for you and a scrunched up hoodie and I was still quite uncomfortable.)

We got to the airport with plenty of time. Sitting at the gate waiting to board was next to torturous! It’s like~ you’ve waited soooo long to go… Those last few hours are hard! When we finally boarded the plane, I was surprised at how huge it was!

On a regular plane, you have your 8-10 rows of 2 first class seats, then a curtain, then the business class 3 seat rows… I’ve never seen a plane like this one! There were 2 different doors to go in through, one was for first class, even though there were more first class seats in the area where we entered. On the way to our seats, we passed by some first class seats. These are nothing like the slightly bigger than normal class seats you usually see… They were like…. pods! As soon as I saw them, I wished I could upgrade! 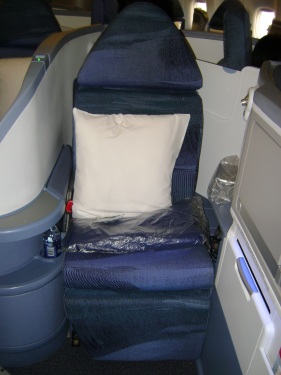 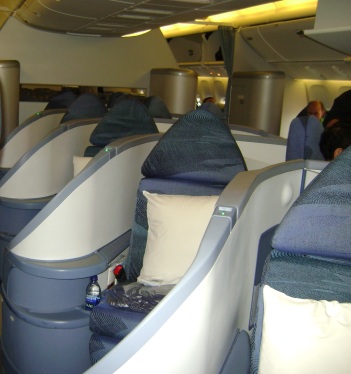 Finally we made it to the 2nd last row of the entire plane and found our seats. (I think they were like 62 or something… I’ll have to check later.) We lucked out though. We were just 2 seats instead of 3 because they need extra room in the back for the flight attendants to move around each other I guess. I sat next to the window ~ such a good husband I have! And there was no one in the row behind us. Just the flight attendants luggage.

I pretty much immediately took a sleeping pill and got settled in. I was anxious about the flight. Not about crashing but about being uncomfortable and/or sick or something. I didn’t fall asleep right away but I think I did sleep most of the flight. I woke up occasionally to look out the window. It was weird because I hadn’t thought about the direction we were flying and time zones… I thought I would experience night time and sunrise but it was 3pm for most of the way there! That was definitely a strange feeling. Must be how the people in the Arctic feel with several months of daylight and several months of night.

The flight wasn’t completely full. The middle aisle in our row was empty. I was thinking that it would be a good idea for us to take turns sleeping stretched out across them but I felt awkward claiming it for ourselves. Turns out ~ there were a few girls (ladies? not sure how old…) that seemed to be having a party in their row about halfway up our section and one of them had a few too many, I guess. Compounded with motion sickness, she ended up puking or something (my husband woke me up to point it out to me) and passed out in the very same fashion that I had thought would be comfortable in the last row. …Lucky.

It was a fairly uneventful ride, other than that. Only one thing struck me ~ the Japanese that the only Japanese-speaking flight attendant used was super-polite! I had been told that service people when speaking to customers use this very polite form but I had never heard it in action. She referred to us as “minna-sama” and ended all her statements with “de gozaimasu“. I don’t know why but I thought meccha kawaii!

This entry was posted in japan and tagged airplane, trip to japan. Bookmark the permalink.